Bulgaria’s most southeastern city /population of 1200/ is an ancient maritime city with rich culture and history. Ahtopol is located some 85 km to the south of Burgas and the Burgas international airport and 14 km from the municipal center Zarevo and the international highway Е-87. The city lies some 6 km to the south from Varvara, 5 km northwards from Sinemoretz, 17 km from the Turkish border at Rezovo and 6 km to the east of Brodilovo.
To the west of Ahtopol is located the highest peak of the Stranjda mountain – Papia, 501 meters above the sea level.The sea near Ahtopol is clean from mechanical or chemical wastes. The salinity of the water is 16 promile, and between July and August, its temperature reaches 24-26°C.
Even in October, you can still enjoy the warm, calm waters of the Black sea.
The city beach is more than 2 km in length, covered with fine sand. The sea bottom is flat and not steep at all.
Ahtopol offers a unique blend of mountain and sea! 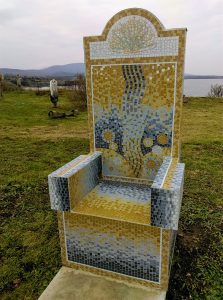 Ahtopol is located over an ancient Thracian settlement, with the earliest signs of human presence dating to the Neolithic period. Around 430 B.C., the city is colonized by the ancient Greeks. The Romans call it Peronticus, and after rebuilding it after a barbarian invasion, the Byzantine commander Agathon names it after himself – Agathopolis.

During the Middle Ages, Bulgaria and the Byzantine Empire fight constant wars over Ahtopol, who has evolved in an important maritime trade city. The Ottoman conquerors once more rename it to Ahtembulu. Since the Balkan Wars, Ahtopol remains part of Bulgaria.In the more than two and a half millennia of history, Ahtopol has been burned down or raided by sea pirates on many occasions. The last great fire dates back to the year 1918, when the whole city was nearly destroyed.

In addition to the fine beaches and sunny weather, Ahtopol attracts its visitors with the unique nature of Strandja. National Park Strandja is Bulgaria’s largest protected park – an area of 1 161 km², equal to 1 % of the countries territory. The closeness to Asia makes it unique for its extraordinary for Europe biological diversity.
Strandja, covered with mystique, attracts people with adventurous spirits, wanting to spend an extraordinary vacation, far away from the chaos and vanity of daily life.Strandja’s coastal lines near Ahtopol have the most sunny days per year in Bulgaria – around 2 260 hours of sun light, mostly between June and July. Enjoy your sunny vacation!